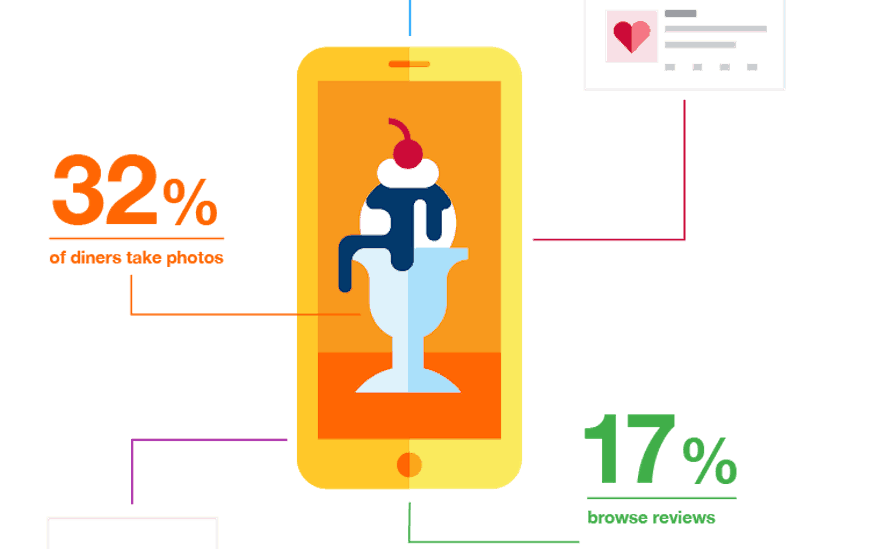 Historically speaking, the act of breaking bread has brought people from disparate backgrounds together more than social media or apps. Our smartphone usage uneasily coexists with this more classic way of socializing. 10 years of near-universal smartphone ownership has brought about huge changes in how we communicate, socialize and relate to one another. And of course in how we dine together. With changing habits, restaurants are finding their business calculus is changing.

One non-scientific study alleged that restaurant-goers spent over twice as much time per meal in 2014 as they did in 2004. How did they double the amount of time per table? It starts with two thirds of diners using their smartphones for quite a variety of tasks while dining. 32% of diners take photos, 19% check in on social media, while 19% search for online deals. Don’t forget 17% of diners browse reviews, 16% look up nutritional information and 8% pay for a meal via mobile.

Take a look at the infographic to see distinct smartphone behaviors during a visit: Checking in at restaurants
Even before guests enter the front door, they may already be checking in via FourSquare, Google, Facebook, etc.

Checking emails/texts unrelated to meal
Work emails, social texts – whatever their source, they need to be addressed before checking out the menu, socializing with people present.

Finding a deal or coupon
32 percent of consumers have used a deal they found online or on their mobile device at a restaurant in the past three months. Sometimes this happens when they’re actually at the restaurant. Among people who dine out eight to 10 times a week, 68% use a restaurant-specific mobile app.

Checking emails/texts related to dinner guests/mutual friends
Dinner guests late? Maybe a last-minute cancellation? Maybe even just connecting with a friend who couldn’t be there in person? It’s all fair game.

Photographing the meal
It’s not enough to remember the meal, it should be photographed for posterity. This may involve some art direction or staging, which takes additional time.

Checking emails/texts related to post-meal plans
As the party decides on post-meal plans, people must be consulted, arrangements must be finalized before leaving the restaurant.

For those who think that smartphones are replacing “real” human interaction, there’s a silver lining. Time spent on smartphones is not at the expense of the traditional dining experience, it’s in addition to it. But the bad news for restaurants is that tables turn over slower, as both servers and establishment earn potentially less. And to add insult to injury, increased dining times come with a commensurate increase in restroom visits, along with sanitary supply needs.

Some restaurants are fighting the trend by offering discounts for customers who voluntarily unplug or give up their smartphone during dinner. Applebee’s went as far as trademarking the term, “No Tech Tuesday” in 2014, though they never rolled out a promotion built around the concept. It would seem as if the effect of smartphones on restaurant’s bottom lines is here to stay. Call it an unfortunate “butterfly effect” of people being social butterflies on their smartphones.

Boost lunchtime business during the workweek